The Airlock is one of the essential rooms. It lets your citizens enter and leave your base without asphyxiating. Once a citizen is in it takes several seconds before another may enter. 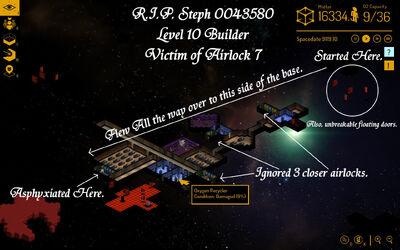 Example of infuriating AI in Alpha 1. This is still the case in Alpha 2a.

3 Dec 2013 (Alpha 2a): Airlocks take more in-game time to cycle when the game is lagging or set to fast-forward.

3 Dec 2013 (Alpha 2a): Citizens who reach 1:00 oxygen remaining while about to enter the base will cancel that action and attempt to find a different airlock.

15 Nov 2013 (Alpha 2a): Airlock doors are not repaired when part of an assigned Airlock

16 Oct 2013 (Alpha 1): Citizens will use airlocks with a hull breach if there are two airlocks