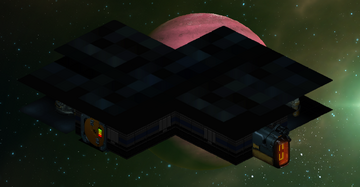 A derelict has appeared. -In-game update

Derelicts are abandoned craft which occasionally appear near your base, and have their contents obscured until explored via a Security Beacon.

Derelicts come in a number of pre-set layouts. At least two additional layouts have no airlocks and only appear docked to your base as Raider ships.

Derelicts will drift away if not used, and can be demolished for scrap matter.

Any combination of the following:

• 1 to 3 Citizens, who will immediately join your base

• 1 Monster (identical in appearance to a parasite, possibly stronger)