JP LeBreton (the project lead of Spacebase DF-9) has made a wonderful guide on how to build your first base.

Note: Some of the information in this video is out of date. For instance, your Base Seed Pod is now your first power source and should not be immediately destroyed. 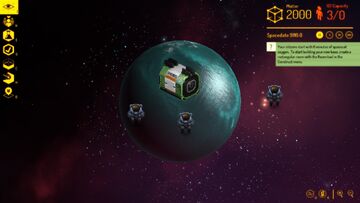 You start with three Citizens, each with eight minutes of oxygen, and a Seed Pod. Build quickly!

This guide will help you build a small running base; its step-by-step nature allows it to be read during gameplay. Many things here can be found elsewhere on the wiki: they are needed for getting started and therefore will also be explained here.

A mysterious event, known as the Collapse, has rendered Earth and her known systems uninhabitable. The last hope for humanity is the Base Seed ZZ-113 Program, developed by Diaspora Fleet Command to save the future of our species. You, as the Administrator, must build a space station in the Milky Way. Deploy your colonists to a system of your choice. Maintain inhabitants' morale, despite desolation and danger, by fulfilling their needs.

Decide where in the Milky Way you want to start building. Four parameters of a candidate star system will influence your later gameplay:

After clicking on a destination, you can reconsider your decision before deployment. Your first base should have a high stellar density, a neutral to average warpgate proximity, the least threat factor, and a low magnetic interference. Each location usually lacks at least one desirable feature. After deciding, hit Confirm and Deploy.

The interface generally has an area for base management on its left side. Stats are shown in the top-right corner, and beneath are speed options. The bottom right corner is for visual controls. This tutorial later explains base management tools. Matter is the main resource in Spacebase DF-9 and is used for every construction task. Beside it is the capacity displaying your current crew and the maximum crew size for which you can provide oxygen.

Hovering over one of your astronauts reveals that they have only 8 minutes of oxygen: rapidly construct your base.

Build an airlock that can be used for entering and exiting your base. Move your mouse to the right corner and click Construction or press c. Make a room by choosing that option from the menu and clicking and dragging it over space. Your airlock needs a minimum size of 2x3, and 3x3 is slightly more practical later on. Confirm this choice. Assign all your astronauts to builder duty, wait for them to complete the room, and click the room (which will say Unzoned Area). Change it to airlock on the left. Return to the construction menu. As in this picture, so you will need two airlock doors and a space suit locker, which are found in objects - doors and objects - airlock.

Next build a second room beside the airlock that your astronauts can enter and exit the airlock through. This room and the airlock must share walls in order to enable movement between them. Make this second room at least 5x5 in order to ensure that it is big enough for your starting phase. Zone it as life support and therein build an oxygen recycler. Hit the O2 button in the bottom right corner and watch your oxygen level rise. Congratulations, you've started your base and your new citizens are no longer in immediate danger of suffocation! You may want to build a second air recycler, because one is providing just enough oxygen for 3 citizens, so the oxygen level will not be rising with all of them inside.

You might want to build a food replicator, too, as starvation is the other big danger in the game. It will provide for the Hunger need at the cost of 1 Matter per meal.

As you have some machines now, you have to go to your roster and set one of your residents to the mechanics duty. Preferably one with three stars in it, as others are an immediate danger to the integrity of your base.

Your next task is build another 5x5 room and put in a Matter Refinery. Set one of your builders to a miner and select over an area of asteroid so it will mine them and produce income.

Let us recap your situation. You got until now:

Next, you will need to expand your base, so further needs of your citizens can be fulfilled. Therefore you will need a refinery. Add it as you did with the life support room before, just that you use a normal door between your life support room and the refinery. Make it at least 4x4 tiles big. Do not worry if the door is built before the room is finished. It is locked airtight until the oxygen level in the other room is habitable. Reassign the room to a refinery and build a refinery object in it. If you run out of matter, you can demolish the seed-pod by simply clicking on it and choosing demolish. Give one of your two builders the task to mine. Now choose mine from the menu an click and drag over some asteroids near your base. They will turn red and your miner will start working if you set up everything correctly. Now you have an almost infinite source of matter (of course it is finite, but it will be enough to support your base for a long time).

The next target you have is to get a residential zone for your inhabitants, as they require sleep. They can sleep on the ground of course, but this will let their morale go down and leads to bad performance of duties. Add one rather large room to your base and make it a residential zone. Place as many space beds as you have crew members to allow them to sleep simultaneously. By now you have some sort of stable base. Theoretically all needs can be fulfilled by now, but some ways are inefficient. Your residents (at least some) will still become sad after some time. To prevent this, add plants and monitors to every room and expand your base to include a pub and a garden zone. Refer to these pages as you should know by now, how the game works. Everything relevant will be explained there.

After some time, you will be told there is a space ship incoming. Some times later, a communication interface will pop up with foreigners asking to enter your base. Read carefully what they want, as they could also be attacking you! If you think you have space for them and their request sounds reasonable, you can accept their offer. Sometimes they will come aboard even if you deny them. Remember that you might want to get a new air recycler and a new bed for every new crew member. Also give them a duty; if you feel you have surplus members, it is safest in the beginning to put them on security duty.

Base is under attack[edit | edit source]

If your base is under attack by a parasite or some raiders, the most important thing is not to panic. Hit spacebar to stop time and get an overview of the situation. If you do not have any security-personnel assigned, do it now. Afterwards, click the beacon from your menu and use it to send your security guards to a specific area. One click assigns one security officer to that position, so you have to click multiple times to send enough officers to make a safe kill. If everyone drops to deeply sad, consider building a new base, as it is really hard to get them out of this state.

Base is on fire[edit | edit source]

If your base is on fire, this can be caused by a defective device or an unskilled mechanic (less than 3 stars) trying to repair something. In both cases, your inhabitants will rush to trample out the fire. If you have fire extinguishers, they will be far more successful. Security guards do always carry fire extinguishers. Consider assigning more skilled citizens to mechanic duty.

A bare-minimum functioning base. O2 levels rise very slowly if you only have 1 recycler.

Make everyone a builder

Your initial base should have at least 3 rooms, including

You will also need a Food Replicator which may be placed on the wall of any room.

This much will be enough to keep your guys alive and allow you to start mining more matter. you will also need a room with your seed in it for power

This step is less urgent and will often require more matter than you start with. So set 1 or 2 citizens as miners immediately after your initial base is constructed.

For this step all you need to do is:

Step 3: Dealing with a Larger Population

Additional room types are generally not going to be very useful until you have extra citizens to serve as botanists or bartenders. But once you do, good food and alcohol will be essential to help get over the inevitable deaths your base will experience.

Don't forget to continue building beds and oxygen recyclers as your population expands.